Giving It All You’ve Got

The Silver Jay at FEAST Photo by Ben Katzler

One of the scariest aspects of life is putting yourself out there and allowing other people access to what lies within. When you make any form of art, part of the artistic process involves putting on display what was formerly inside for the world to critique. There is often a point at which you feel as if everyone is laughing at you. Inevitably, this is sometimes because they are. Particularly in England, where being cynical (sometimes also referred to as ‘critical’) is practically an art form all its own. The majority of people do not really even bother taking a chance and risking the ridicule. Its easier, its safer that way. They go about their lives, doing their jobs, criticising from the sidelines, getting wasted at the weekend, never leaving their familiar comfort zone; never experiencing the terrifying depths or the exalted heights.

These sentiments are also true, I believe, when applied to love. Love is scary, and challenging, opening yourself up to the unknown. There is nothing that I have yet experienced that is capable of bringing more pain and more pleasure, in unequal measure. Once you have lived firsthand the rich tapestry of emotions that are associated with this mysterious force, the safe bet would be to steer far clear. But if you are not accessible and do not put yourself out there again, plow fearlessly through the minefield of helpful opinions, yours and others, then there is no chance that mysterious door of love will be opened again. Someone once wrote me an astonishingly beautiful letter. In this letter they quoted who they thought to be Walt Whitman. Although I have since learned that the source of this quotation is actually Rudyard Kipling, it almost in no way diminishes its power. It goes like this,

If you can make one heap of all your winnings
And risk it all on one turn of pitch-and-toss,
And lose, and start again at your beginnings
And never breathe a word about your loss;
If you can force your heart and nerve and sinew
To serve your turn long after they are gone,
And so hold on when there is nothing in you
Except the Will which says to them: “Hold on!”

It is always risky business to stand there, heart in hand, and boldly declare your love to someone. It is the ultimate in courageousness and having faith in the universe and its magical ability to provide; that even after all the heartbreak that previous love and loss may have brought, to risk it all by giving it all you’ve got and letting someone in once again.

Access, and who it is granted or not granted to, has become the big business of our modern age. If someone had told you even ten years ago that your privacy, and the way in which your personal information is shared would be such a hot topic, most likely you would not have even known what they were talking about. My Jesse was the other day telling me about a man who has formed a company that protects people’s personal information. For years everyone said he was crazy. Now we all understand. There have always been thinkers who were ahead of their time, who could perceive something that no one else could, who everyone laughed at and called mad, who eventually were recognised as the great artists, lovers, inventors of their time.

There is another, more esoteric sort of access that is granted to those that you have loved deeply, regardless of whether you would happily never be with them again. No matter how much time has passed, there are always those moments when your psychic realm is invaded by thoughts of them and the love you once shared. Are they thinking of you then? This can be triggered by the slightest thing: a song, a leaf falling from a tree in a certain season, a whiff of beloved perfume. This form of giving of yourself does not seem to be something that can be completely controlled.

How much or how little access to grant to the world at large is a topic that almost constantly preoccupies me. On one hand, the internet, with its information sharing capabilities, makes me feel a bit like I am living in a glass goldfish bowl. I feel like I would like to be very private and have no one know anything about me, live off-grid in a tipi by a stream or something. I hate the never-ending share-all functionality of FB and Twit, despise how everyone knows everything about everyone. Yet on the other hand, here I am, writing an online diary, and something in me is so brutally honest that I cannot help but to tell the truth and give something of myself away in my words. Secretly, although there is evidence to the contrary, there is part of me that suspects that there is no one out there reading this at all. Is there anybody out there? 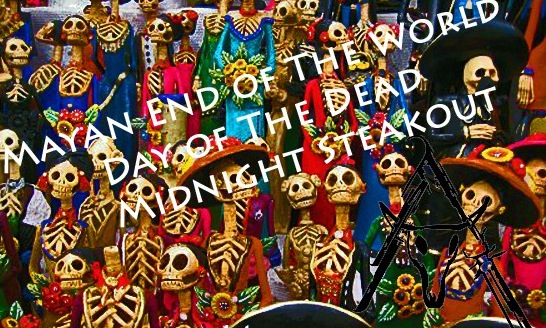 Tomorrow I am putting on another one of my Midnight Steakouts: Mayan End of the World Day of the Dead. As always, even in spite of its previous successes, I will admit that there is a spell of time between the moment of announcement and the eventual event when it feels as if no one is going to come. Imagine you are a little girl having a birthday party, there in your prettiest dress with your hair all curled, sitting next to your cake before the moment of arrival thinking no one is going to come and that everyone hates you. But then the doorbell rings and the place is flooded with people and presents and candles and song. Somehow it always comes together. 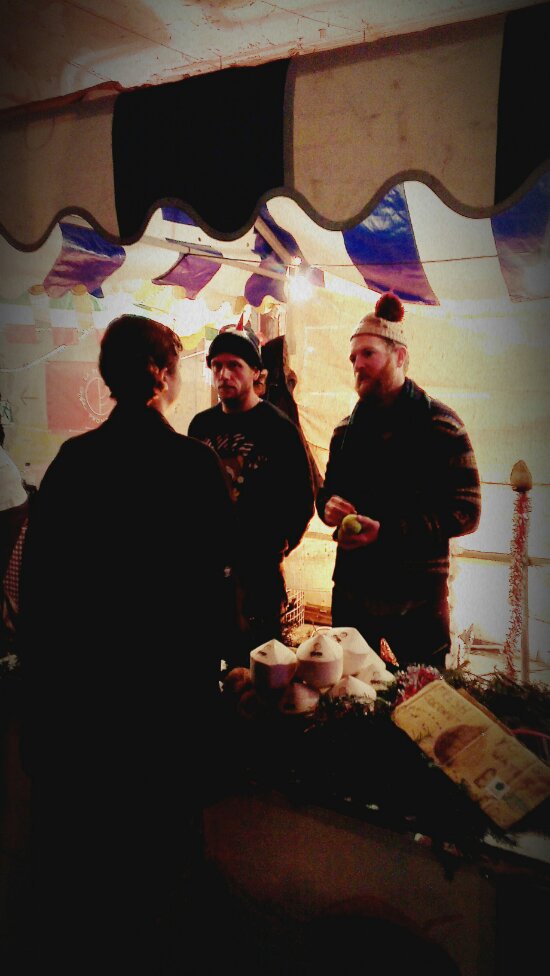 I will also admit to being slightly terrified that I will spend Christmas this year completely alone. I’ve been home to Florida already twice this year and am not feeling flush enough to just dash out there again to spend the time with my family. Having spent the holidays previously with both friends and ex’s families, I have learnt my lesson there. I may do some volunteering, which will go some way towards appeasing my loneliness and the general guilt amassed from living. I will have some quiet, peaceful time alone to do some writing, which will be welcome. I will not deny that there is a dominant part of my imagination which has been indulging in fantasies. In this hormonally charged reverie, a certain man who I had previously and quite publicly written off, comes galloping in on a white horse, brandishing tuberoses, lingerie, and that perfume that he loves so much to bestow upon me snuggly winter love, mistletoe kisses and mince pie Christmas dinners. For sharing too much of what should be private here with you on this public forum, my hands are raised in a gesture of apology and surrender, snow white flag in one hand, the other hand on my heart.

And so, despite an almost ever-present sense of trepidation, I will get onstage tomorrow night and sing my songs. I will once more put myself out there and invite the world to feast at my table. I will write these words for you to read which I know gives far too much of myself away. And each and every time that true love comes knocking, with an innocent heart I will again throw open the door, unfettered and somehow still alive, with heels kicking.

So, let them snigger from the sidelines, let them break my heart again, a life worth lived is full of failure, as much as is the greatest win. You can quote me on that.

As Samuel Beckett once said,

All of old. Nothing else ever. Ever tried. Ever failed. No matter. Try again. Fail again. Fail better.

As Beckett declared it to be true

is something to be

Until your fingers are numb

and wet from the sweat of hands in pursuit.

And with holes in your shoes;

Caught up in the struggle

until your face is blue.

With a glint in your eye

from an aim that is

Knowing that every brush upon the immortal page

can never be your master stroke;

you pour your heart all out again.

wordsmith, songstress
View all posts by Gracie Johnson →
Gallery | This entry was posted in written by A. Grace Johnson. Bookmark the permalink.

2 Responses to Giving It All You’ve Got